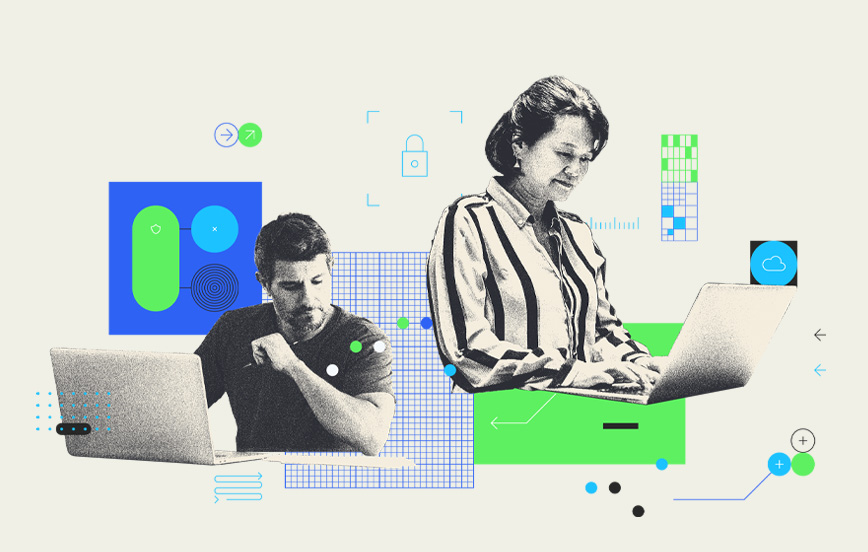 How companies are making far-flung employees feel like teammates.

Last December, emboldened by the rise of remote work, a marketing firm in the Midwest began hiring staff outside its time zone. Soon, however, vaccines became widespread, and some of the executives began pushing for everyone to be back in the office full-time. The newly hired out-of-towners suddenly faced a dilemma: relocate or lose their job.

Weeks later, however, the pandemic worsened and returning to the office became dicey again, so new hires continued to work remotely. This back-and-forth within the company was jarring to say the least, even—or especially—for managers.

“I oversee a team that is in the office and I’m not, and at first it was a little weird,” says Kevin, who lives in the Pacific Northwest and supervises a team in Kansas City. “I traveled recently and met everyone, which was good, because it helped me understand some of the office dynamics that I was missing by not being on site.”

Today, these sorts of hybrid arrangements are the norm among knowledge workers, with just 34 percent of respondents to an April 2022 survey reporting that they work from the office five days a week. Some workers are back in the office, at their desk from nine to five, and others are remote—or some combination of the two.

This discrepancy is bringing a pressing issue to the fore for many managers, one they may not have dealt with before: proximity bias, in which a person tends to give preferential treatment to those physically nearest to them. In the workplace, proximity bias often manifests as employers viewing those who come into the office regularly as more productive than those who don’t, and thus prioritizing them for promotions or raises.

Managers are taking notice. According to a survey released in January 2022, some 41 percent of executives said proximity bias is now their number one concern as inequities develop between remote and in-office employees.

“It’s not something I realized before,” says Kevin. “But now it’s something that I’ve not only experienced myself, but need to make sure I don’t do with my colleagues.”

For managers, proximity bias is sometimes hard to combat, because it’s often ingrained in traditional management styles. It’s also a natural human tendency—we’re most comfortable with those we’re around a lot. In the office, when on-site employees come in early, stay late, and burn the midnight oil alongside colleagues to finish a project, it’s easy to laud that dedication, because it’s visible. Remote employees, by contrast, may be putting in just as much time and effort, but no one is there to witness it. Left to fester, feelings of being overlooked—or the perception by in-office employees that they have an unfair workload—can create an environment of bitterness. Because leaders play an outsize role in perpetuating issues that arise from proximity bias, it’s up to them to help the organization avoid it. One starting point is to develop a clearer, more empathetic understanding of employees’ preferences when it comes to remote work.

For example, two-thirds of remote workers are reluctant to return to the office, according to one survey. But women and people of color are more likely to view remote work as beneficial to them than their white male colleagues, according to another survey. These differences extend to the office hierarchy. For executives, 75 percent said they would prefer to work from the office three or more days a week, compared with just 37 percent of non-executives.

Why the differences of opinion? It may be that many people who were disadvantaged in a traditional office environment—one where working overtime in a cubicle or at a desk was viewed as a positive—simply don’t want to return to an office that doesn’t fit their schedule (or one that doesn’t respect the work they put in from home). Think of a parent or caregiver who needs to leave early to meet a family obligation but logs on later to help finish a project. Office-based workers may not acknowledge this commitment and effort because it isn’t visible to them. In fact, these workers may themselves be more productive with a flexible schedule and welcome the opportunity to work remotely.

In other instances, workers who don’t fit into the club of office gossip and Friday happy hours are naturally loath to return to those modes of interaction. Ironically, the thing that makes these workers prefer remote work—that they would rather focus on the work—makes them more productive, even if they are less likely to be noticed by a manager who continues to assess employee contributions according to physical presence in a cubicle.

The good news? Leaders can avoid pitfalls in perception and competitive friction simply by recognizing that proximity bias exists, which helps guard against it. Managers should resist the inclination to assign onsite workers one type of task and remote workers another. Instead, they should create integrated teams and mentoring systems.

“Mentorship or partnership programs can make sure everyone’s thoughts and ideas are treated equally,” says Aimee Daramus, a clinical psychologist in Chicago. By ensuring that ideas and responsibilities are shared equally between in-person and remote workers, the opportunity for proximity bias is neutralized.

It’s important for managers to offer remote-work flexibility for in-office employees too, so they can see to their own work-life balance. Give people the option to work remotely during slower periods or when responsibilities at home tick up. Also, be sure to let both in-person and remote employees tweak their schedules when possible, so they can focus on the job when they’ll be most productive and attend to their lives at other times.

Find ways for staff and supervisors to check in

When a company’s workforce is spread out remotely, it does make it harder for businesses to monitor employees’ productivity. Some have gone Big Brother, forcing people to keep their cameras on or spying their keystrokes. Making bosses into overlords who count bathroom breaks is a surefire way to get people to hate their jobs. Swinging too far in the other direction—with employees feeling untethered from their supervisors—doesn’t work well, either.

If you’re a manager looking to overcome proximity bias, start a daily check-in that gives employees an informal way to summarize what they’re working on. This is doubly effective when a worker is putting in long hours on a specific project—they can drop a line when they’re wrapping up and reinforce their hard work with a digital time stamp. It’s also an effective policy for new hires and people switching to remote work for the first time.

Offering remote work opportunities is a great way to attract global talent. But integrating far-flung team members is a challenge. The first hurdle is technology. Companies should expect to continue making investments, large and small, in hardware and software to ensure everyone has reliable ways to connect and collaborate. For example, it’s easy to notice that an in-office employee’s computer is outdated and needs an upgrade, but not when a colleague is working from home on a company laptop that’s a few years past its prime. The same goes for IT support. Many at-home workers are left to problem-solve their own computer issues. Companies need to provide an avenue for this, and to consider footing the bill for high-speed internet and other necessities. If the playing field is unequal, it’s inevitable that the players will have unequal results.

Speaking of level playing fields, technology, boosted by AI and machine learning, helps multinational companies and remote employees seamlessly bridge communication gaps—like a workforce that speaks multiple languages, for example. Today, communication technologies are able to parse speech patterns to offer accurate, real-time transcription and audible or text-based translation, closing language gaps. Additionally, holographic, wearable, and camera-recognition innovations enhance collaboration beyond the two dimensions of the computer monitor. And advances in network, video, and tactile capabilities enable even astronauts to enjoy face time with coworkers and family members—ensuring they remain connected even when working remotely in the cosmos.Human nature being what it is, though, the first person to achieve deep-space HD video communication with planet Earth will probably start aching for office gossip. At that point, perhaps the virtual water cooler will have arrived, where we can share complaints about the latest terrestrial TV reboot.

Field-tested tactics for getting ahead in a virtual office

You can now work at your job for years without ever meeting your boss in person. What will that mean for career advancement in a remote-work future?  In 2020, almost... Introduction The move to hybrid work has sparked controversy among prominent business leaders. Some view remote and hybrid work as a mere chapter in history—a means to an end during... Can you keep virtual collaboration both easy and secure? The power of the compassionate engagement

Do you know the biggest challenge your team faces outside work right now? Be sure to ask and listen. And watch PayPal’s Dave Montez on the power of the one-on-one....